(the copy rights belongs to ZHOU ENSI LTD, reproduce is not allowed)

No matter which kind of flowmeter is installed, there should be straight pipe sections in front and back to ensure the medium flowing through the pipe at a steady and uniform speed, so as to improve the measurement accuracy. During the installation of ultrasonic flowmeter, the straight pipe section from the first 10d to the last 5D is required, 30D far away from the pump valve.

It maybe tricky when getting the most accurate readings with a ultrasonic flowmeter, even with a top-of-the-line device, as asymmetric velocity profiles, swirl, and other factors caused by bends in pipes can alter reading results with many flowmeters. 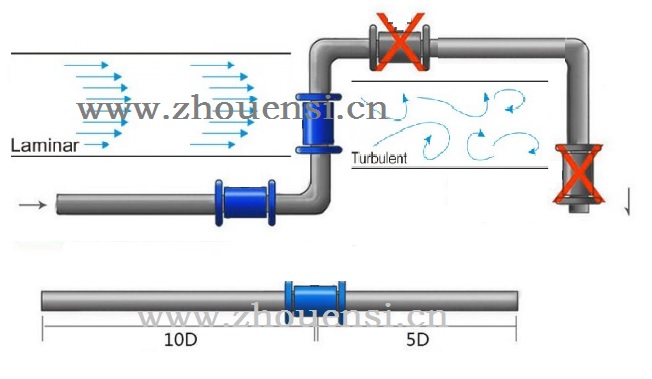 Like many other flowmeters, this ultrasonic flowmeter should be installed upstream of elbows, valves, or reducers. Make sure to allow for the longest possible straight run piping between the meter and the obstacle. The length of straight run can be as short as 5x the piping diameter as long as an additional error of 1% is acceptable. 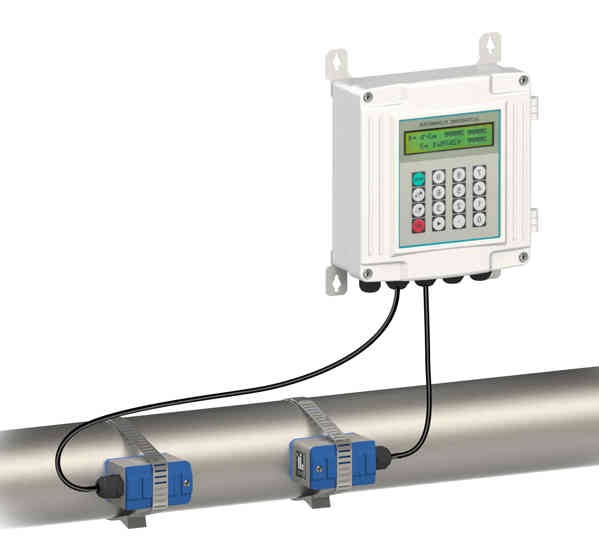 
Flow-profile distortion and swirl, the two most prominent types of fluid disturbance that affect a meter’s flow coefficients, are typically the products of improper piping configuration. A distorted fluid velocity profile is one of the most common reasons for inaccurate flow meter readings. Swirls or other distortions in the flow are caused by the tees, elbows and valves that make piping systems functional. But, to keep your flow meter functional as well, there are some piping requirements regarding the fluid’s flow profile, which is almost entirely dependent on a system’s piping orientation.


The less straight run there is before and after the flow meter, the exponentially higher the meter’s error rate percentage becomes. Because of this, flow meter manufacturers will suggest a certain length of straight-run that must exist upstream and downstream of their meters. These requirements will vary by technology and manufacturer.

Optimally, fluid with a “laminar” flow profile is moving smoothly through the pipe. The velocity of laminar flow is highest in the center of the flow and slower as it reaches the pipe walls. In most cases, natural laminar flow only exists in straight-run piping. When 90 degree angles, half-open valves, misaligned flanges, or even pipe wall pitting exist within a piping system, the fluid flowing through it is disrupted, which can cause inaccurate flow meter readings.